As I wrote in an earlier post, the most significant impediment to deliverIng great experiences is not design or execution or planning, but bureaucratic organizations whose values are anathema to human engagement. And one of my biggest frustrations is the assumption that because organizations operate this way now, they most always have and always will do so.

In fact, the tools and processes that organizations use were created to solve specific problems of their time. One such tool was the organization chart, created in modern business by Daniel C. McCallum to help manage the Erie railroad line, mostly around communication and coordination (to prevent accidents which were becoming prevalent). As businesses grew, they adopted hierarchical organization structures, the better to execute on the command-and-control necessary for mass manufacturing. And the org chart emerged as the tool for visualizing this organizational structure. 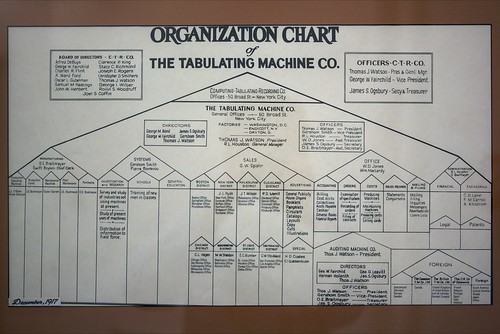 The problem with the org chart is that it seems to have affected how people are able to think of organizational structure, because even today, organizations essentially resemble those of 100 years ago. It’s as if people were drawing org charts for so long, they just thought that represented the natural structure of the organization. Org chart software assumes such hierarchy. People mistook the map for the territory, and these diagrams became reified in practice.

The reason I fucking hate organization charts is because they are emblematic of how broken standard business practice is. Command-and-control hierarchies are appropriate for an Industrial Age mindset that favors control in order to achieve consistency, efficiency, and quantifiability. That was fine because the offerings being produced were relatively simple. Once you bring CPUs, software, and networking into such a system, the offerings become mindbogglingly complex. Org charts diagram how to take a problem and break it down into a set of components. This kind of specialization and piecemealing that suited the Industrial Age is exactly wrong for Connected Age business.

Departmental silos are no longer practical, because solutions necessarily have to cross functions. I’ve worked with numerous companies who claim to get this, who talk about the need for “cross-channel” approaches, who want to “cross-sell”. However, these companies still maintain organizational silos, where the people at the top of these silos are still rewarded for their silo’s performance (regardless of how it effects the rest of the organization), and this means that coordination across silos is discouraged. It’s like we’re helpless to overcome this.

Org charts are so good at depicting bureaucracy, where each box is like a drawer in the larger “bureau”, that they’ve become part of the operating system of companies. In turn, they drive things like job titles (and the attendant responsibilities), pay grades, authority, and people’s relationships to others within and outside the corporation. As such, people are defined not by who they are, or their skills, but by their box on the chart. Sadly, this means that when companies face problems, among their go-to solutions are a “re-org.” And what this ends up looking like is simple a redrawing of an org chart. Processes, mindsets, and values don’t change. Just who reports to whom. What percentage of re-orgs are successful? What do they actually accomplish?

Another thing I hate, related to org charts, are job titles. Job titles are associated with a set of qualifications and responsibilities, with the idea that anyone who has that job title can do the same activities. Basically, people are made as interchangeable as the parts of a machine. But, we know that just because two people have the same title, they are not identical. We know that job titles do not describe the extent of a person’s responsibilities. I watch a lot of basketball. Basketball teams have “job titles” — point guard, shooting guard, small forward, power forward, and center. But any fan knows that folks with the same title are far from identical, and that the secret to success is the chemistry that emerges from the combination of the right set of individuals. We need to apply this mindset within our companies.

If we’re going to get away from the bureaucratic thinking that defined the Industrial Age, we need to set aside outmoded tools that were created for wholly different needs than what we have now. We need to stop assuming that the way we were taught is the way it always was (and always should be) done, and we need to come up with new models and approaches to address our current reality. The org chart is a graphic icon of a retrograde mentality; I urge you to question, if not destroy, them every chance you get.