After leaving Dublin, we spent 6 days or so in the West, first south of Galway, then north.

The highlight for me was The Burren. It’s a stunning landscape that requires seeing in person to really understand. Still, I’ve Flickrd some photos of our time there. Comprised of a set of sloping limestone mountains, driving and hiking around it provides an otherworldly experience. 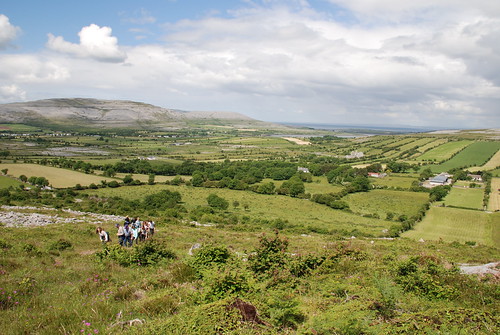 I’ve titled this post “Hiking/Walking in the Burren” because when I did a Google search with that query, very little of value turned up. When, in fact, one thing should have been front and center: hike the trail the begins just a few kilometers south of Black Head (and north of Fanore), and that goes north to Black Head (the northwestern-most point in the Burren) and then curves east. It is a stunning hike, with the ocean on one side, limestone topography on the other, and you’re up high enough that you get a great view. It’s not too taxing (the grade is slight) so even just casual hikers can enjoy it. I wish we had been directed here straightaway — so I’m doing that for you! This is the roadside at the beginning of the hike: 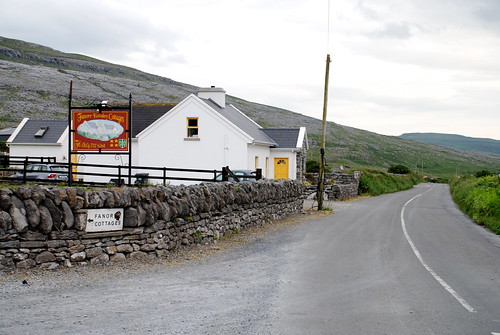 The trail is just to the left of this.

Anyway, The Burren was beautiful, and I heartily recommend visitors to spend time there.

Apart from the hikes, other nifty things we saw in The Burren include the Portal Dolmen (like 4000 years old or something): 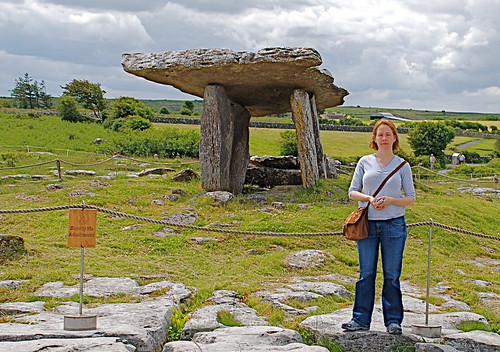 And Corcomroe Abbey, originally built in the 1300s or so. 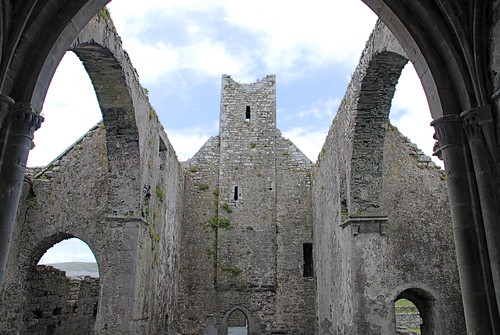 After the Burren, we did a quick trip down to Lough Gur, an historic site that, well, isn’t really worth visiting. Now you know.

We finished our time in the West in County Mayo, staying in Westport, and spending one day out on Achill Island, and another day in Connemara. Achill Island was pleasant, and the Deserted Village was kind of neat. Connemara might be beautiful, but the wind and rain prevented us from finding out.

As I do not know how to drive stick, and car rental companies, being the fuckfaces that they are, charge more than double for renting cars with automatic transmission, Stacy did all the driving. On the other side of the road. And after 5-6 days of driving around the West, my recommendation is akin to what a wise man once said about teenage suicide: Don’t Do It!

For starters, Ireland, like the UK, still drives on the wrong side of the road. I mean, as an American, I feel like a schmuck every time I leave the country and see the rest of the world happily using the metric system. But I also feel that the Brits and the Irish (and the Japanese, for that matter) are schmucks for still driving on the “other” (read: WRONG) side of the road. Face it: you’ve lost that battle. It’s foolish.

Second: the “highways” in Ireland rarely have more than 2 lanes, and often afford barely enough purchase for two cars to be side-by-side. Which is particularly daunting when a ginormous tour bus approaches you.

If we knew then what we know now, we’d have never rented a car. Instead, we’d have researched various Western Ireland walking/hiking tours, something like this, which we only found out about after we were on the road.

Western Ireland, like all parts of Ireland, is not cheap for drinks or eats. We realized that the locals simply don’t eat out much, because every restaurant, no matter where we were, was dominated by travelers.

In the Burren, our best meal was at the Berry Lodge, where we also happened to be staying. I had a duck entree the memory of which makes my mouth water.

In Westport, which proved to be a surprisingly charming little town, we ate well at both Torrino’s (Italian) and Mangos (seafood). The most fun we had in Westport was drinking at what seemed to be a venerable institution, Matt Molloy’s, famous for it’s good feel and traditional music. It was one of the only places we went to where you’d mingle with locals. When we got there, a little old man was singing in the back room, attended to by dozens of people crowded around. He sang traditionals and not-so-traditionals, often tinged with racy humor. The crowd would join in (when it knew the words). Definitely worth pushing your way in to hear!