For the last session at IDEA 2007, the entire conference delegation crowded around near the stage, and talked about what we’d heard over the two days. Essentially, we were all processing the event. I wrote down key themes as they were uttered. Blurrily, they are: 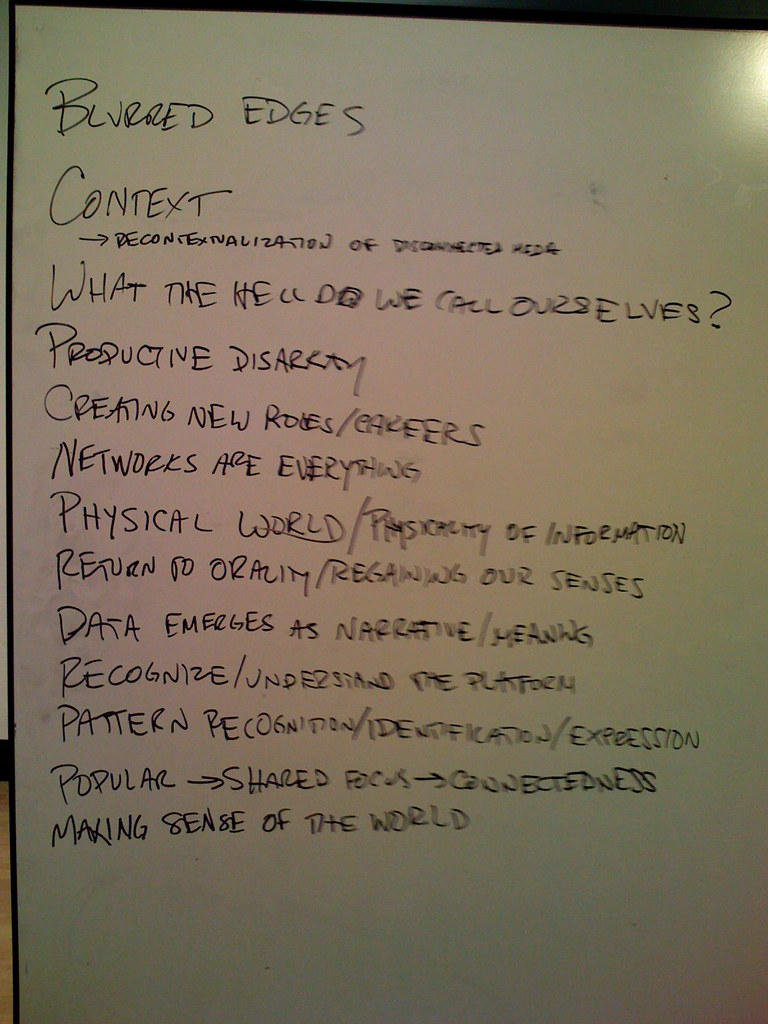 I think there was a stronger thematic pull this year than last. Apart from the general “designing complex information spaces of all kinds,” the only other intentional theme had to do with urbanism and, specifically, New York City. It was interesting how neither of those really cropped up at the end. There were two main thematic poles–Blurred Edges and Context–with a kind of secondary theme of Networks are Everything.

It’s hard to have a theme broader than Context, but I think we addressed it pretty specifically. One of the challenges that designers of information spaces have is recontextualizing the information they are providing access to. Interactive media are notoriously without context, in that they are very often simply flat screens with stuff on them. This is why so much of interactive media design involves providing context — navigation bars, breadcrumbs, “page 1 of n”, and the like.

There are many avenues for providing context (or, as the photo shows “recontextualization of disconnected media”). Some of it has to do with the theme Physical World/Physicality of Information. This came out most evidently in David’s discussion of ambience as an opportunity to communicate information in concrete ways (like, say, clocks), and Mike Kuniavsky’s presentation on WineM, which makes all the metadata about wines (varietal, vintage, region, vineyard) accessible through a wine rack.

Another opportunity for context is storytelling. Michael Wesch’s opening keynote impressed the importance of storytelling in the Papua New Guinea culture he studies, and how the imposition of bureaucratic means of census and other modes of classification have lead to strife because context had been removed. Or, in Jake’s work, narrative is an explicit tool for communicating information.

The other big theme, which I titled Blurred Edges (appropriate for that blurry snapshot) is more about practitioners trying to make sense of their roles. There was a great moment were someone brought up the challenge that information architects have long had defining themselves and their activities, and Michael Wesch, bringing his background in linguistic anthropology to bear, said that such confusion is actually a sign of Productive Disarray, which suggests a life and liveliness of a thriving profession. It has become our responsibility to Create New Roles and Careers, because this stuff hasn’t been defined, but someone has to do it. Folks like Sylvia (a self-described graphic designer), Rachel (who studied interaction design), or Jake have had to essentially make up what it is they do. Perhaps the most interesting in this regard was Chenda, who studied at the interactive media program ITP, and who is now, essentially, a bureaucrat, managing the systems behind the scenes at New York City’s 311. (And Chenda easily has the coolest bureaucrat job ever.)

As we make our way in this professional array, Networks Are Everything, introducing us to people who can support us as we try to Make Sense of the World. Similarly, networks drive the Connectedness that is bringing people together.

I’m realizing, as I write this, this is all still a little too abstract. I don’t have the energy right now to concretize it, and, frankly, I think doing so could easily fill up a book. Luckily, all the sessions were audio recorded, and you’ll be able to hear for yourself what transpired, and make your own connections.