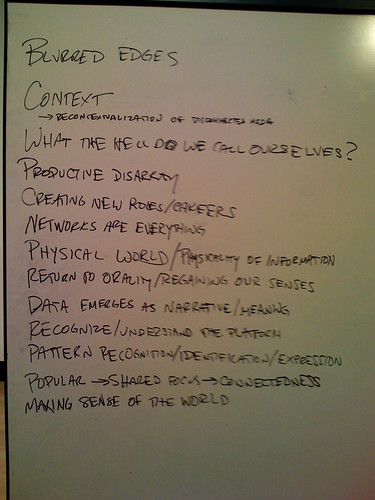 This past Thursday and Friday I hosted IDEA 2007, a conference on the design of information spaces of all kinds. This photo captures the themes we identified in a conference-wide discussion at the very end of the event.

It was an awesome event. Thanks to the efforts of the IA Institute‘s many volunteers, I could focus on paying attention to the speakers, and they were, across the board, great.

My biggest revelation was our first speaker, Michael Wesch, professor of anthropology at Kansas State University. Michael is most famous for his The Machine is Us/ing Us video. I didn’t know what to expect from him — I invited him because of the video and his background in anthropology. I admit, I was concerned he’d bring The Discourse and get all academic on us. Instead, he was an excellent speaker, clear, bright, passionate, and clever. He’d be ideal for any event having to do with technology, education, or information, and I’m proud to have introduced him, personally, to a new audience. He showed off two new videos that he hasn’t yet released, both of which will make huge splashes.

There was so much other great stuff, too — Sylvia Harris sharing her case study of redesigning (or rather, simply *designing*) the wayfinding system of Presbyterian Hospital in Manhattan; The Brad Paley Experience; Hasan Elahi’s on overwhelming the watchers; Chenda giving us a glimpse behind the scene of New York City’s 311… and I could go on.

In a second, and longer post, I will go into detail on the themes we captured, because they truly get at important characteristics of what it means to design in an information-drenched and uncertain world.