After seeing the an interview with author on The Daily Show, and reading a glowing notice in The New Yorker, I made a priority of finishing The Most Human Human before I ended family leave. 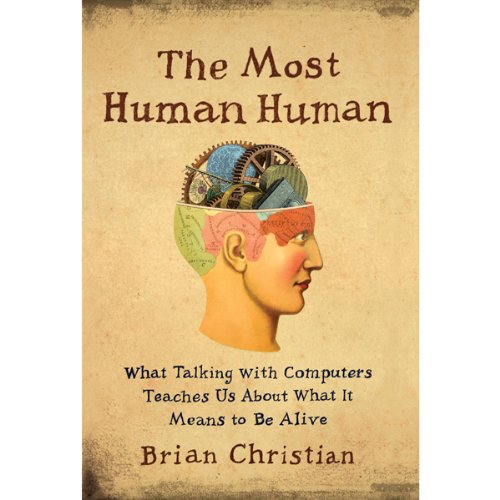 It’s a delightful and discursive book, wending its way through cognitive science, philosophy, poetry, artificial intelligence, embodied experience, and more. The author, Brian Christian, writes with a deft touch, in an episodic and occasionally meandering style that feels like you’re taking part in a good conversation.

Which makes sense, considering the book’s supposed raison d’etre is the author’s preparation for being a confederate (a human participant) for the Loebner Prize, in which judges of a Turing test have conversations with computers and humans, to determine both The Most Human Computer and The Most Human Human.

As part of this training, Brian, who has B.A.s in philosophy and computer science (from Brown, natch), and an MFA in poetry, endeavors to better understand just what makes humans human. In doing so, he runs across what he calls “The Sentence,” which every discipline that studies humans (anthropology, psychology, sociology, etc.) has some version of, and goes something like, “The human being is the only animal that ____________”. Except that the items that have filled in that blank (“uses tools”, “has language,” “feels remorse”, “thinks”, etc. etc.) have been taken down one by one. Perhaps the best fill-in is, “obsesses about its own uniqueness,” because, really, what does it matter if humans aren’t wholly unique (except, perhaps, in our agglomeration of traits), and yet why do we seem to get so worked up about being distinct from all other creatures? But I digress.

This book came at a particularly opportune time, given the theme of my recent writing on business in the Connected Age — that it needs to embrace our humanity. In the context of computation and automation, Brian addresses the world of work, how many activities that were once done by people are now done by machines, computers, and robots. He astutely points out that replacing people with machines isn’t the problem, but what happens before then, when people’s work tasks become so rote and repetitive, that you’ve essentially turned people into machines. You can’t have IVR (interactive voice response) until you’ve already turned customer service representatives into automatons by requiring them to closely follow a pre-defined script.

The book also digs into our collective left-brain bias, with a quote from Oliver Sacks: “The entire history of neurology and neuropsychology can be seen as a history of the investigation of the left hemisphere.” It’s becoming clear, though, that we favor the left-brain over the right at our own peril — those with strokes affecting right-brain function can find it impossible to make decisions, because it turns out decisions are rooted in emotion, not rational analysis. There’s even a mention of user experience, and how it’s ascent demonstrates a shift away from a left-brained “rational” desire for more features and functions, toward a whole-brained understanding of how people behave, to support, as my colleague Jesse calls it, “human engagement.”

Anyway, I could go on, but I simply don’t have the time. In short, get the book, read it, engage with it, talk to it, take notes as you think about it, and enjoy it.