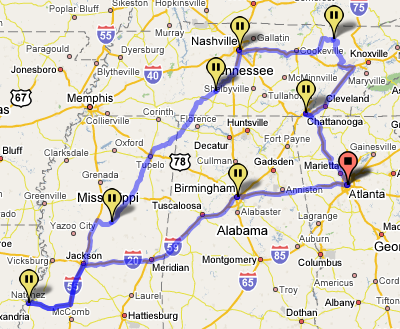 Stacy and I just completed an 11-day road trip that traced this path: Atlanta, Birmingham, Natchez, Kosciusko, Summertown, Nashville, Rugby, Chattanooga, and back to Atlanta. (See it on Google Maps)

There’s too much to relate in any detail, so I’ll stick with highlights, lowlights, and other random observations. There’s a photoset up on Flickr.

Atlanta is not really much of a town for tourists. There are constructed attractions, like the Georgia Aquarium, which are there in order to give tourists something to do, not because they’re really germane to the area. Probably the most impressive tourist attraction was the Cyclorama, a gigantic oil painting depicting the Battle of Atlanta that you view from rotating seating. Atlanta proved to be a bit of a disappointment, though we did very much enjoy Fat Matt’s Rib Shack: 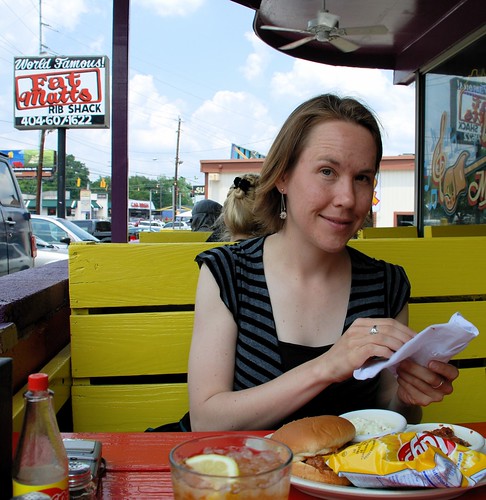 Speaking of food, maybe we just didn’t go to the right places, but we were underwhelmed by our food choices. We were hoping for lots of great barbecue and meat-n-threes. We got a little bit of great barbecue, and no standout meat-n-threes. The best barbecue, hands down, came from the Old Plantation Bar Be Que in Chattanooga. We were turned onto it by Jim Leff’s Chow Tour blog. 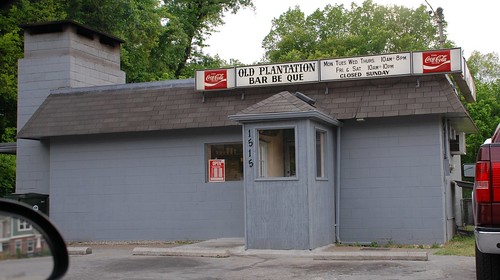 Our best breakfast was at Ria’s Bluebird in Atlanta. Pancakes to DIE FOR. Or rather, to kill for. Even dearly loved ones. You would kill them if they got in the way of you getting these pancakes. And it’s right across from Oakland Cemetary!

The best bar was Lou’s Pub and Package Store in Birmingham, AL. I can’t describe it any better than Esquire, so I’ll let them. 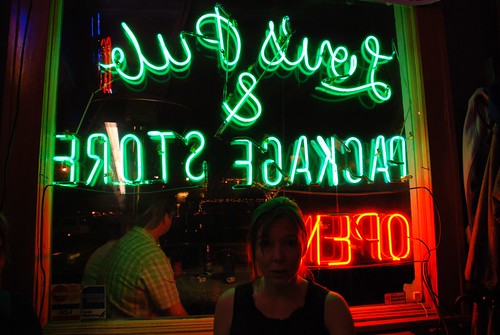 In Tennesee, we had two experiences with utopian communities. The first was The Farm in Summertown. For $40, we stayed at You’re Inn At The Farm , in a small room in the Ecovillage Training Center. You’re in a giant house with about 8-10 other people, sharing a kitchen for vegetarian cooking. 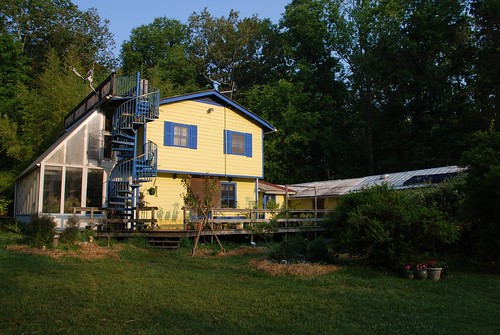 The Farm began in the early 70s as a straight-up hippie commune, and at its height, had 1500 people living collectively. In the early 80s the commune collapsed (for various reasons, but, mostly, it seems, because the energy went out) and turned into something of a land trust, run almost condominium-style. That change is what allowed The Farm to survive — it simply wasn’t sustainable as a commune. The Farm might be best known throughout the country as the primary force for bringing midwifery back to prominence in America.

It was a bit sad how… moribund The Farm felt. It seems to have reached some level of stasis at around 150-200 residents, though word is more people are leaving than joining. We wandered around the morning we were there, and there was almost no one else about.

The other utopian community we visited was historic Rugby in northern Tennessee. Founded in the 1880s as a cooperative, class-free agricultural community, it never ever ever really succeeded. But, it left some pretty interesting architecture and stories, and it’s right smack in the heart of Stacy’s time period, so we spent a day there checking it out. The single most impressive remnant of the community is the Hughes Free Public Library, which remains pretty much unchanged since the 1880s, and is *filled* with priceless first editions of books. Sadly, my photos of the interior turned out poorly. Stacy has one that demonstrates the era: 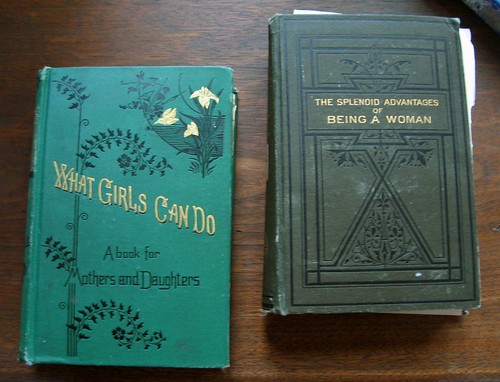 Anyway, Rugby was delightfully relaxing spot, and worth visiting if you’re interested in that period in history. We stayed in an historic Rugby building, which was very charming. If you do so, purchase your dinner ahead of time at the town cafe (they close at 6). You don’t want to have to drive to 20 minutes to Jamestown for a mediocre meal, like we did.

Chattanooga was a surprise to us. Even a couple days before we got there, we weren’t sure we were going to stay there. We did, and it was very pleasant. We enjoyed the Incline Railway and Ruby Falls, and if we’d had more time, we’d have visited Rock City. 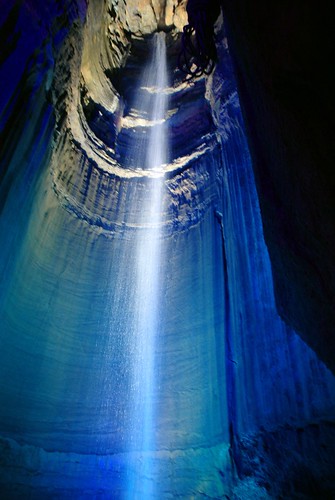 Chattanooga’s river walk was pleasant, and it’s where we ate that great barbecue I mentioned before (Old Plantation is all take out, so we ate it on a bridge overlooking the Tennessee river). Rembrandt’s made for a relaxing evening coffeehouse. 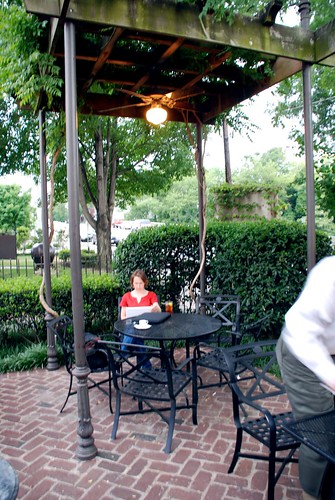 We could have spent a full two days in Chattanooga and been very satisfied. We definitely preferred it to Nashville (we’re not country music folk).

I haven’t even addressed the heart of our trip, which was driving the Natchez Trace. It’s an awesomely beautiful drive, thanks to it being maintained by the National Park service. No billboards, very calm, beautiful scenery, plenty to see and do. The highlight of the trace itself, for me, apart from the pretty driving, was visiting the Cypress Swamp. There’s a 30-minute trail around milepost 120, and the swamp is just amazing to look at, to listen to, and to be part of.

I think that’s enough. If I were to change one thing: I’d go a month (maybe two) earlier. Everywhere we went, the weather remained in the mid to upper 80s and humid. Which limited our mobility (and doubtless contributed to my girth — I gained ~ 10 pounds on this trip).