Somehow, I don’t seem to know anyone who has ever been to Cusco. And, to be honest, before planning this trip, I’d never really thought of Cusco, and had no idea really what to expect. Stacy, being an archaeologist, knew better — the area around Cusco is rife with Inca ruins, including, most famously, Machu Picchu.

I’m annoyed that I didn’t know anyone who’d been there, because I’m guessing that person would have told us that 4 days wasn’t going to be enough. We realized this about 15 minutes after landing.

So, let me tell you: If you’re visiting Cusco, and are truly interested in the historic sites, give yourself 6 days there. Okay.

The first set of Incan ruins we visited began with Tambo Machay, about 30 minutes bus drive outside of Cusco. (And by “bus” I mean “collectivo,” a cheap form of transit — we paid around US$.70 for a 30 minute bus ride; we were among the few gringos on the bus.) 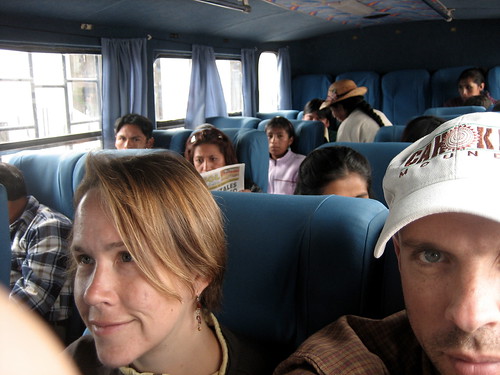 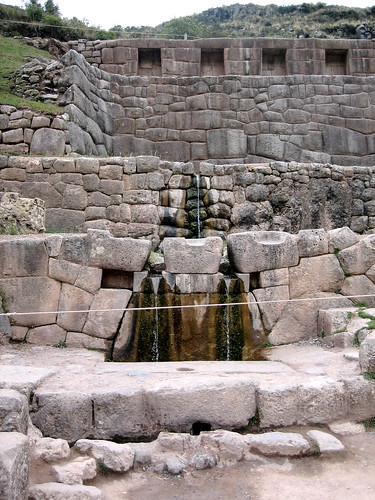 There’s not much else there, but it’s an impressive site, and a good start to a walk through three sets of ruins (four if you count Pucu Pucura, but there’s really not much there). The idea is you start at Tambo, and then walk back down the road toward Cusco.

The next ruin, Q’enko, is actually kind of fun. There are two items of note at Q’enko. One is the carved out cavern, a kind of small version of the labyrinthine tunnels that you seen in a lot of Inca sites… 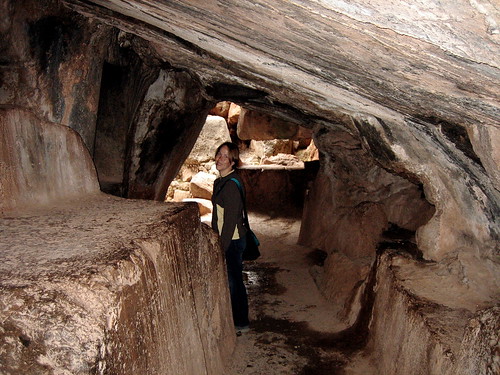 More interesting are the zig-zag channels that were used in blood-letting rituals. There were a series of such channels, and you’d sacrifice animals (or humans) and their blood running down the channels would help predict the future. Or something. 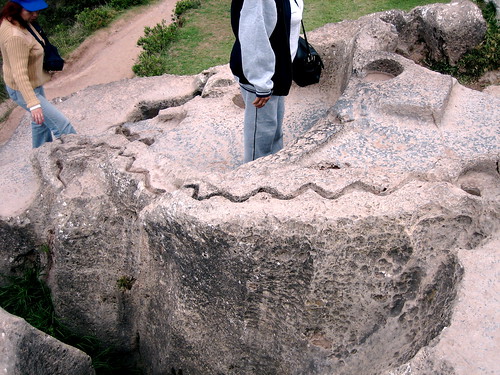 The final ruin on this walk is Sacsayhuaman, the Inca site closest to Cusco. Sacsayhuaman is much larger than the prior two sites, though the primary distinguishing feature at this time are massive stone walls. There’s not much else going on here… 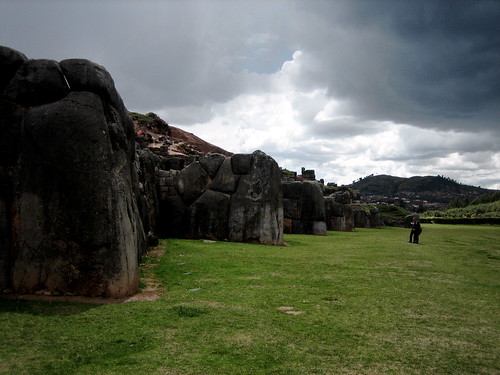 Well, when in Cusco, there is one site that you have to go to. And that’s Machu Picchu. Getting to Machu Picchu is something of an ordeal. Many folks opt for the Inca Trail, the four-day hike culminating in “The Mach” (as I decided to call it). We didn’t have the time, equipment, nor desire, so we opted for the train ride.

You take a 4 hour train ride from Cusco to Machu Picchu, through the pretty pretty Sacred Valley. Perhaps you’ll be in a car full of Germans, like we were: 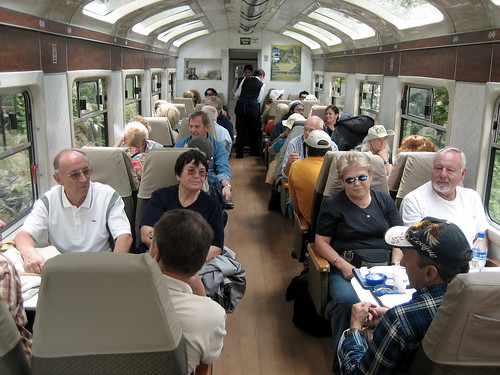 Arriving at Aguas Calientes (the town nearest The Mach), you can either walk, or get a bus up to the site. We opted for the latter (after some confusion, trying to find the buses on the other side of the labyrinthine craft market).

You arrive at the site, and you wait in line to enter, upon entering you climb a set of steps, and your first view of the site looks something like this: 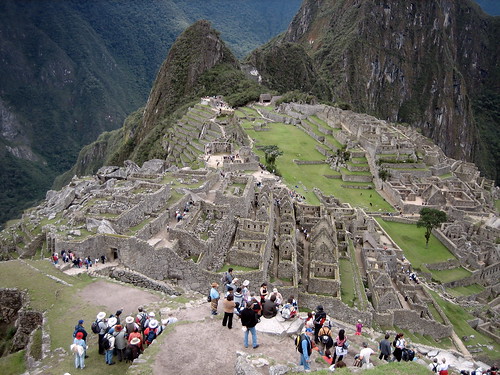 Apart from the awesome majestic beauty, the unparalleled landscape, and the size of the place, what you notice are all the people. Even in what is considered the “off-season,” The Mach is crawling with people, people from all over the world, people in their brightly colored clothing, people moving _en masse_ from place to place.

We did what we could to avoid the teeming masses and spend our own time on the site. We wandered around for about 3 to 3.5 hours, taking it all in. And taking a lot of photos. Some favorites of mine: 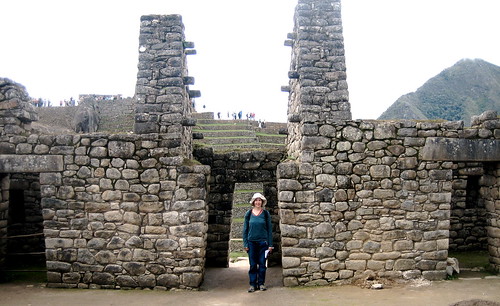 Stacy in the Three Doorways 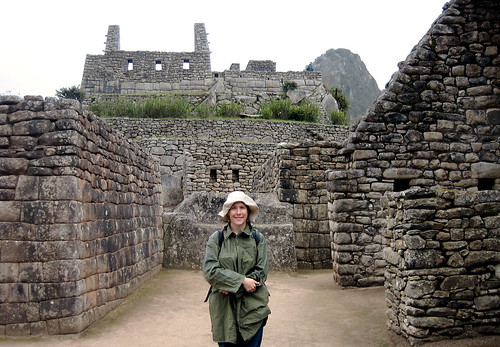 Stacy in the residential area. The residential area might have been my favorite on the whole site. It was revealing just to see the spaces in which people lived. Little house-like structures, lined up in a row.

The Shot Most Likely to End Up on a Moo Card.

(All my Machu PIcchu photos)

The train ride back provided something of a surreal experience. We sat across a couple from New Jersey who were on a packaged tour, and, well, who honestly had no personality whatsoever. (It was one of those things that confirmed my prejudices about Those People Who Take Packaged Tours.) Then there was a fashion show of clothes made from alpaca, modeled by Perurail employees, with cheeseball music. And then there was us getting off in Poroy, because it’s quicker to take a bus from there than the train (you save about 45 minutes), and having the bus get pulled over by the cops and all these Gringo passengers sitting nervously in a foreign town having no idea what was going on.

So how do I feel about Machu Picchu? I don’t quite know. It’s an amazing site, for sure. It’s largely and remarkably well-preserved (for ruins). It’s ensconced in some of the most breathtaking mountainous landscape you’ve ever been in. It’s unlike anything you’ve ever experienced. And for that, it’s worth visiting. But it’s frustrating that it’s *so* expensive and time-consuming to get there, that it’s teeming with tourists, and that the park provides no interpretive materials — you either need a tour guide or a detailed book to know what it is you’re looking at.

On our last full day we headed to Pisac, a ruin about an hour outside of Cusco. Pisac is now known for two things — the ruin way up on the hill, and the artesan market in the heart of town. Upon arriving, we made straight for the trail up the hill, and found ourselves following a local who occasionally stopped to play his pan flute (an inadvertent poke at Stacy and my difficulty breathing climbing the hill). He introduced himself to us, his name Miguel, and he offered to take us on a free guided tour — he just wanted to practice his English. It was great–he helped us understand far more than we would have gotten just on our own.

Miguel told us about the Inca Cross, lead us around the various structures, and explained the numerological meaning behind 3 (puma, snake, condor), 4 (cardinal directions/4 elements), and 7 (all the peoples of the world, symbolized by the 7 colors in the rainbow). 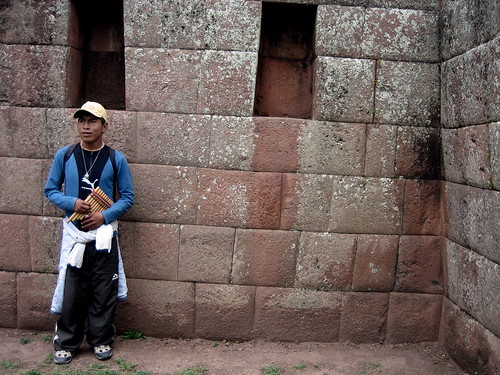 Miguel is 21 years old, and said he makes the walk everyday for exercise. I have no idea what else he does. He was an interesting person — clearly a somewhat solitary soul (he was walking along, playing his pan flute to himself when we ran across him), but interested in engaging with new people.

Pisac was a real revelation to us. For one thing, it’s huge — the acreage spanned is larger than Machu Picchu. But it’s not all contained the way The Mach is — there are natural formations to build around, so there’s probably less “usable” square footage. Still, it’s pretty complex, and in a pretty good state of preservation. 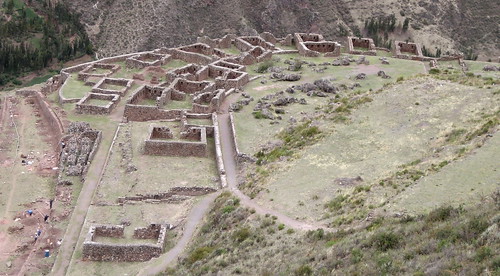 These is just one small portion of the Pisac ruins, the living quarters, which, according to Miguel, are arranged in the shape of a partridge.

Word of wisdom — if you hike up, prepare for some complications if you want to drive down. Most people are driven up by cabbies (or in a tourist bus), and those cabbies wait to take their people down. It took a while before an unclaimed cabbie came up that could take us back.

Oh, and the “artesan crafts” market in Pisac? Filled with crap. As were many of the Incan markets — wall-to-wall mass-produced crap. I was so frustrated I ended up buying nothing.

And, those are the ruins we saw. Perhaps in a later post I will detail more of our Cusco-specific experiences. But now, I’m about to get on the plane for California!