I realized a couple days before we left on our trip that Stacy and I had planned no outdoorsy excursion while we were in Chile — though, from what I could tell reading the guidebooks, getting your outdoors on was the main reason to visit Chile. We didn’t have time (or equipment) for anything extreme (no Patagonia or Tierra del Fuego), but our reading revealed a national park between Viña and Santiago (where we had to go to get a plane to Peru) with a mountain you can climb.

According to the guidebooks, Parque Nacional La Campana is among Chile’s premier national parks, and it’s centerpiece, Cerro La Campana, is famous for two reasons — you can see the ocean and Santiago from its peak, and Charles Darwin climbed it in 1834. So would we.

There are a few towns near La Campana, the largest and most practical being Olmué. We stayed at the Hosteria el Copihue right in the center of town.

I’ll take the city first — Olmué is dull. As Jorge warned us before we headed there, it’s a resort town for old people. There’s pretty much nothing to do in Olmue but hang out in your hotel and eat at one of the few restaurants in town.

As a hotel, Hosteria el Copihue was uninspired. It cost too much money (it ended up being around $100/night with tax), and provided too little in terms of service. Also, the restaurant there was mediocre. I cannot recommend it, though I wouldn’t know where else to direct you in Olmue.

My favorite place in town was La Cafetta, on the main avenue, which served tasty coffee drinks and good jugos naturales. We went there a few times for a relaxing beverage. 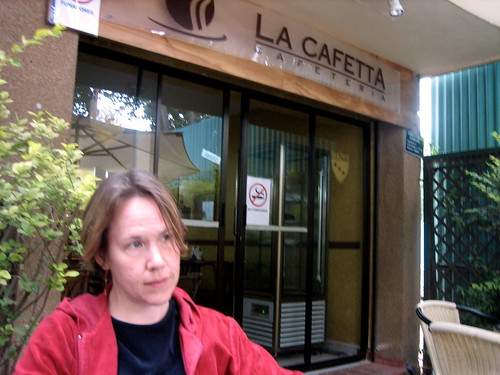 But really, we weren’t in Olmue to be in Olmue. We were there to climb La Campana. So, on our first morning in town, we woke up, fortified ourselves with desayuno, and set out for the park.

We didn’t like it for a number of reasons. The primary one was that there was no real warning as to how difficult the climb was. The guidebooks mention that it’s very steep, that you shouldn’t wear sneakers, blah blah. They don’t mention that for long stretches the trail pretty much disappears as you scramble over broken rock. That “steep” is an understatement. That it’s a remarkably difficult slog up the hill. So, we weren’t prepared for what lay ahead, and that upset us.

Also, when you get to the top, while the view is spectacular, it’s not, well, interesting. Chilenos love La Campana because they have a context in which to put what they’re seeing — the ocean, the surrounding valleys, the cities. As a foreigner, all that context was lost on me — seeing it all in one sweep didn’t *mean* anything, so it was just a view. And while a good view, it wasn’t worth the 4.5 hours of getting up the mountain, nor the subsequent 3.5-4 hours return.

Simply put, I just don’t think La Campana is really “worth it” to a non-Chileno. I’ve never been on a hike before that felt so much like work, just a slog.

So, I cannot recommend it.

Olmue and La Campana were travel experiences, and, when you adventure a bit, well, you’ll occasionally be disappointed. And we were.

Basically, what we realized as we left Olmue and headed to Santiago (where we spent the night before getting on a plane for Cusco, Peru) is that we simply spent too long in Chile. We should have shaved two days off of our Chile travel, and spent longer in Peru, specifically Cusco, because Cusco is simply amazing. But that’s for another post…