Walking on the UC Berkeley Campus, I saw this:

Hrm. That seems like an odd place to put a barrier. It’s not like there’s a cliff to fall over.

Still don’t quite get it? How about this bird’s eye view, taken 3 years ago, from Kevin Fox’s “Berkeley Paths” photos (gallery no longer on line): 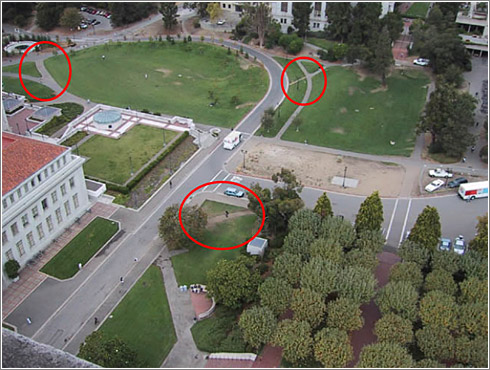 Look in the upper-middle-to-right-hand corner. See how there’s an asphalt path, heading from up-and-right to down-and-left, which is then continued by a dirt path, linking to the bend in the road??

Well, as this new photo demonstrates…

…that path is now gone. So, that barrier was designed to protect the grass.

In a presentation I gave a long time ago on emergent information architecture, I used the first birdseye photo to demonstrate how people will take a planned design and modify it to fit their needs. In the face of this, designers have two choices — allow the modification, or throw up obstacles (God forbid you digress from the original Vision!).

So, the landscape folk at Berkeley, in their foolishness, have chosen the latter. Not that it matters. People, being what they are, simply walk around it…

There’s another interesting development. Look at the center of the first birdseye photo, and the bottom-right of the second. In the first, there’s a wide dirt path cutting across the corner. In the second, there’s a darker green patch, showing where it’s been re-sod.

For some reason, Berkeley would rather spend it’s money reinforcing it’s poor landscape architecture with barriers and re-sodding, then recognizing that the paths suggest a valuable will of the people.

Though, this is not always the case. In another part of the campus, diagonal concrete paths were laid where it was clear that people walked, and are still in use:

Pretty soon, Berkeley is going to have to face a new situation:

As you can see, a path is getting worn in across this field, crossing from the top-right to the bottom left (it continues paths already set in asphalt). Will Berkeley choose foolish fascism or opportunistic organicism? Time will tell…