Over the last few days, Stacy and I noticed that Jules had some trouble getting his words out. He’s doing some rather classic stuttering — repeating the initial sound of a word at the start of a sentence.

Being first-time parents, we had what is doubtless the universal response, “Should we be worried?” It turns out: no. Stuttering is common in toddlers, as, it seems, their brain moves faster than their vocal apparatus can support.

Child development is fascinating to observe. Such stuttering is simply the most obvious expression of how Jules’ various systems advance at differing rates. Jules is tall for his age, but his muscle coordination hasn’t caught up, leading to a lot of stumbling, tumbling, and just outright falling. (Though, given his parents’ coordination, this might be a lifelong deficit.)

Something I hadn’t realized until now is that Jules et Jim (perhaps my favorite Truffaut film) has been on my Tivo for two years now (don’t ask). I first saw the film in college, and what I remembered most was Oskar Werner’s remarkable performance. I didn’t recall if he played Jules or Jim, but watching it now, just found out… Jules!

And isn’t he pretty!

(Though, of course, if memory serves, Jules in the movie is remarkably sad… Again, part of Werner’s remarkable performance is his sensitivity, how he carries that off.)

Among the challenging decisions new parents must make is the name of their child. It’s a lifetime commitment, and not something to be taken lightly.

The first name was trickier. Early on I proposed David, my middle name. I’ve always liked the name David (and when I was a little kid, wished it had been my first name). But I was concerned that giving him my middle name might be narcissistic, so we kept our eyes open for alternatives.

In July, I posted about The Naked City. It’s directed by Jules Dassin, and I turned to Stacy at some point, and said, “How about Jules?” Jules works for us on many levels. Most important: my mom’s name is Julie, so it’s a kind of family name. Also, well, I sincerely appreciate the director’s work, and, frankly, his left-leaning politics. The Beatles’ song “Hey Jude” was originally titled “Hey Jules,” and that makes for a good lullaby. And, of course, there’s the pun on “jewels”.

24 hours after his birth, we still hadn’t settled on a name. We like both David and Jules quite a lot, and I found myself vacillating between the two. Earlier I made a comment that “David Joseph,” while a good name, sounds like the name of somebody else’s child. “Jules Joseph” sounds like the name of our child (It helped that Jules is an anachronistic name, which both plays into our love of history, and allows us to own it more.”. As we’re staring at the birth certificate form, Stacy said, “It’s Jules,” and we were done.

So, there you have it. Jules Joseph Merholz. 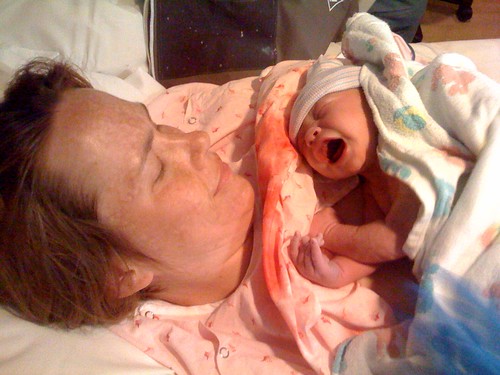 This morning, nearly 2 weeks before he was due, our son was born. (He doesn’t have a name yet (we’re still deciding), so we’re calling him Baby. We may still call him Razputin, his in utero name.)

Stacy amazed the staff with the speed of her labor — from water breaking to delivery was nearly exactly 2 hours.

Mom and baby are happy and healthy. There are a few photos, including a disgusting one of placenta, in this Flickr set.