When I last wrote, we were leaving the California redwoods and heading north for what proved to be hailier climes.

We stopped in Brookings for lunch and to see the placard commemorating the Japanese attack on the Oregon Coast. Given that bit of history, we felt it only proper to eat sushi for lunch, at Cafe Kitanishi. The food was very tasty, so much so we had no room for their special desserts — a variety of cheesecakes (which struck me as very un-Japanese).

The drive to Newport was farther than we thought, and we didn’t get in until close to 5pm. We then spent the next few days here and around the Oregon Coast.

A big reason for our staying in Newport was the Oregon Coast Aquarium. See, Jules has a fascination with fish, something we’re more than happy to encourage. The Aquarium is an excellent way to spend a couple of hours. The sea lion feeding was perhaps the most entertaining aspect, and the surround-aquariums in the new “Passages of the Deep” exhibit reward as much time as you’re willing to spend in them. 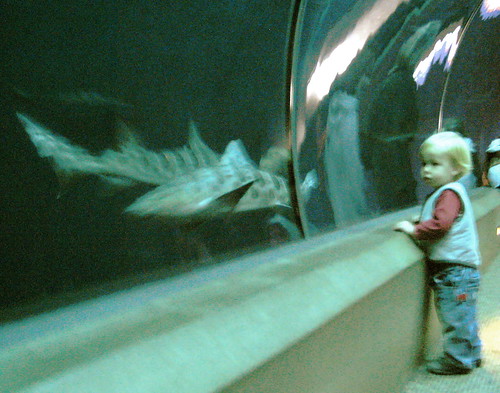 We happened to be in town during Rogue Ale’s huge Brewer’s Memorial Ale Fest, a celebration of beer and dogs. Sadly, it was not a celebration of babies, or anyone under 21, so Jules could not go… which meant that Stacy and I had to trade off. Which made the event far less fun, because you’re basically standing around, drinking beer (good beer, yes), holding on to a dog (Milo) who is shaking with fear at all the other dogs. So, this didn’t work out as we’d hoped.

The other big activity for us was hiking around Cape Perpetua Scenic Area. Cape Perpetua is an excellently-managed state park, with an informative visitor’s center, a number of trails ranging from super easy to fairly difficult, and plenty of signs and interpretations to provide context for your excursion.

With our time, we chose two hikes. The first was “St. Perpetua“, which takes you up 800 feet for the single best view of the Oregon Coast: 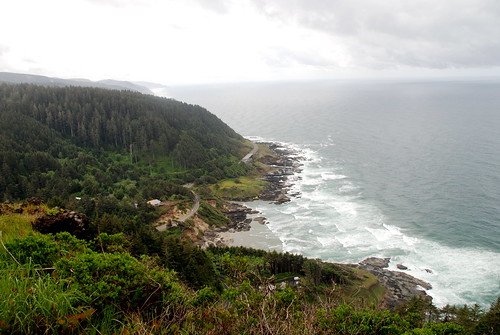 We then opted for the easier hike towards Devils Churn, an craggy inlet where waves crash right in front of you. My photo doesn’t have much drama: 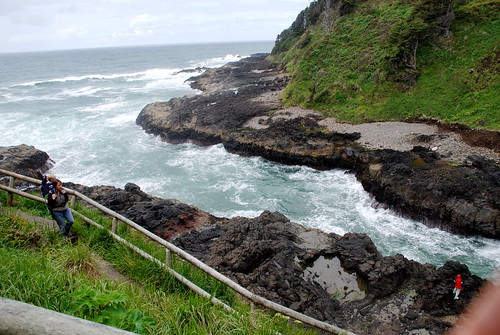 but this video someone else too demonstrates the activity:

I would heartily recommend Cape Perpetua to anyone looking for an outdoors escape on the Oregon Coast.

Newport turned out to have a number of delightful eateries. Our first, the Rogue “Brewers on the Bay” was fine (nothing special), but our lunch the next day, at South Beach Fish Market (world’s worst web site, by the way), was quite satisfying, with fish and chips (where you could actually taste the cod) and dungeness crab.

Our best meal so far on this entire trip came from the quirky ARR Place, a restaurant that seems to exist in a converted basement of a house off a side street. We read about it on a couple of sites, and were not at all disappointed. ARR are the initials of the family that runs it, and you definitely feel more like a guest in someone’s home than in a normal restaurant. I’m bummed I didn’t take more photos to help put across the flavor of the price. The cuisine is a kind of contemporary American — we had shredded beef in lettuce cups, goat cheese ravioli, a grilled opah with banana ketchup, and the piece de resistance were two remarkable desserts, a raspberry biscuit with buttermilk ice cream, and a turtle sundae with house-made roasted and candied pecans. Oh, and they even have a full (though small) bar, so I was able to get a martini. We left the place utterly stuffed.

Cafe Stephanie supplied us with a very tasty breakfast — I heartily recommend their quiches.

One night we had a jones for some Asian spices, so we ended up at Bangkok Thai and enjoyed a good meal, lead off by a surprisingly satisfying tom kha gai.

The Coffee House had a good basic breakfast — the wild mushroom and spinach omelette was filling and savory, and kept me good for the drive to Portland. It also probably featured the best coffee on this part of the trip, though, like everywhere else we went to on the Oregon coast, it was brewed way too weak.