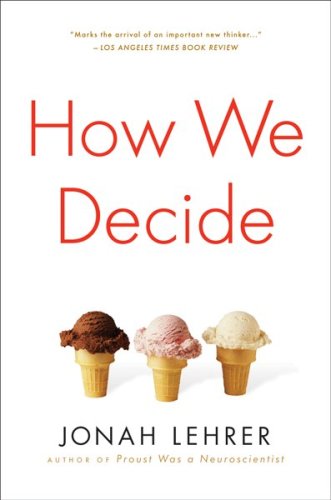 How We Decide is the latest book of pop cognitive science to attract significant attention. In it, Jonah Lehrer positions his discussion as something of a battle, or, at least, a give-and-take, between the brain’s deep-seated emotional urges and its rational considerations. One is not better than the other — each excels in certain situations (emotion is great for split-second decisions; reason helps make better choices given a limited number of options) and is detrimental (emotion is easily exploited through reactions to things like loss aversion; reason can lead to overthinking when given too much information) in others.

The book has a lot of information in it; which might also be it’s downfall. It’s clear that Lehrer has attended the Gladwell school of non-fiction writing, anchoring his facts in stories. The difference is that Gladwell employs just a handful of stories over the course of a book, letting each one breathe, having each one carry significant weight. Lehrer stuffs How We Decide with little story after little story, and after a while, you lose the bigger plot. I would have preferred Lehrer to focus on just a few key tales — the firefighter who figured out how to save himself in a raging brush blaze; the kids with the marshmallows; the poker player who embodies the perfect balance of reason and emotion — and let go of the study after study after study that he relates.

Another challenge this book faces is the glut of adjacently-themed texts. Having read Gladwell’s Blink and Outliers, and Ariely’s Predictably Irrational, and having heard the marshmallow story (it’s become a surprisingly prevalent flash-meme in the past few months), I was familiar with much of the book, and in an odd way — I kept wondering if I had read the story earlier in How We Decide, only to realize I had read it in another book.

My guess is this is a good book for those who haven’t been keeping up on the latest discussions in cognitive science, and are looking for an informative foundation. I respect Lehrer for not engaging in the type of specious/fallacious reasoning that has afflicted Gladwell’s work. Lehrer recognizes that the sentiment “it depends” is not only valid, but essential to the discussion, and doesn’t propose sweeping generalizations or applications.