Stacy and I spent the last three days in the capital and largest city of Ireland, Dublin. In most Western cities, the big wave of immigration is something that happened decades ago. In Dublin I was intrigued to see immigration as it happens — in the last 10 years the city has seen an enormous influx from outside, mostly Polish and Chinese, and even some African. 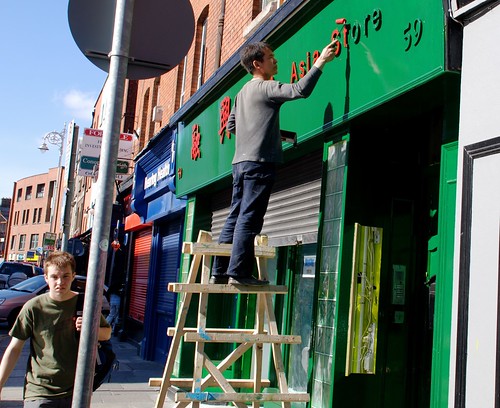 The most obvious expression of immigration was in retail — stores devoted to Polish or Asian goods. It was also common to hear languages other than English as you walked down the street. And, perhaps predictably, almost all the service workers were Polish or Chinese. Apart from this, though, immigration seemed, well, an uninteresting phenomenon. I was expecting more tension or chaos or something, and, really, it just was what it was.

This might be due to Dublin (and Ireland) still recovering from a remarkably poor economic legacy. As such, there’s plenty of room for immigrants to settle, as so many Irish left over such a long period of time.

This means that Dublin is still, understandably, a second- or third-tier city. Even with the economic revival which has lead to the immigration influx, Dublin doesn’t feel truly essential. You get the sense that many of Ireland’s best are likely to live and work elsewhere to perform at the top of their game.

Easily our favorite sight was Kilmainham Gaol, a prison used from the 18th to 20th centuries whose history reflects the warp and weft of Ireland, from the Napoleonic wars (the return of the soldiers instigated the first glut of prisoners here) to the Irish famine (abject poverty causes crime of all sorts, and there was a period where Kilmainham had as many women as men, due to prostitution) to most famously the Irish Independence movement, whose early leaders were all imprisoned (and many executed) here. 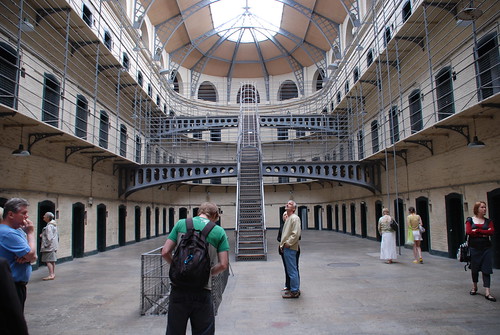 The Gaol is an imposing edifice, and the stories of its inhabitants quite poignant. The museum offers excellent interpretation of Dublin history, and if you go, make sure to take the guided tour — walking the grounds is a truly powerful experience.

The Guinness Storehouse is de rigeur for any visitor, and basically worth it. No longer a functioning brewery, your self-guided tour takes you through a highly designed multimedia experience on the creation of Guinness Stout. Archly crafted propaganda, it still works as an introduction to beer making, and it’s fun to see the old advertisements, bottles, and the like. Also, the view from the Gravity Bar, where you enjoy your “complementary” pint (you *did* pay â‚¬12 for the tour), is stellar. Surprisingly, there are very few places to eat near the Storehouse. As Dublin’s major tourist attraction, we assumed the area would be crawling with restaurants… We were hard-pressed to find food, though we ended up at a bakery a couple blocks east that had good sandwiches (and is far less expensive than the dining options in the Storehouse itself.)

Trinity College is pleasant enough, but we were decided not to visit its premier attraction, as spending â‚¬8 to see an old book under glass seemed a waste of money. Instead, we focused our energy on the Chester Beatty Library, a fabulous museum featuring the collection of the man after whom it is named, who was an avid collector of all sorts of things, particularly religious texts and books from throughout the world and time. Separate from the astounding collection, the cafe offered tasty Mediterranean lunch, and the Library’s Zen roof garden provided a welcome respite from our urban hike.

Before entering the Museum of Archaeology and History, we were hit with the tireds (delayed jet lag, we think), and the museum didn’t help to wake us up. Much of the experience was of the sort that turns people off from museums — confusingly laid out rooms with lots of stuff under glass. I did enjoy one area — Viking Ireland, which illuminated an element of Irish history I hadn’t known about, and, more importantly, featured cool old swords, swords for PILLAGING.

Dublin’s not really a foodie town. As all the guide books will tell you, you can eat well, but only if you’re willing to spend lots of money. For our first night we enjoyed sit-down Polish cuisine, particularly pierogis, borsch, and pork neck fillet.

Our second night we ate at The Winding Stair, featuring contemporary Irish cuisine, locally sourced and very fancy. It was our most expensive meal (and would have been even moreso if Stacy were drinking), and quite good. We realized, though, that like many foodie restaurants in the States, the better option is to order an array of starters, and skip the mains.

Our third night we went downmarket to a noodle place on Parnell Street. We wanted to have an Asian hole-in-the-wall experience, and we weren’t above saving some scratch. After some online research, we settled on Charming Noodle. It had one of those menus that goes on for days, featuring a Pan-Asian selection. It was pretty good, though nothing spectacular.

I never did find a really good cup of coffee in Dublin. Surprisingly, the best coffee I had came with breakfast in our guest house. Everywhere else, the stuff tasted like Nescafe.

The Queen of Tarts is in all the guide books, and rightly so. If you’re looking for an afternoon pastry (I had a tart, she had a scone), it’s delightful.

We didn’t pub it as much as probably should have. We did have one truly satisfying pub experience at The Long Hall, an old school establishment catering to a cross-section of ages (though not ethnicities… no Asians or Polish in sight).

We stayed in unremarkable lodging, The Anchor Guest House, on Lower Gardiner. We chose it for it’s location and price — it’s a quick walk to central Dublin, and we paid â‚¬70/night including breakfast. I can neither recommend nor discourage staying there.

We never found a welcoming neighborhood for relaxing and hanging out. The closest would have been what I read was called “SoDa” (South of Dame Street), between St. George Street and Grafton. Given the weak weak weak dollar, we were disinclined to shop. If we had spent another day there, I would have wanted to head farther south and east than we did, beyond St Stephen Green… It seemed like there are some interesting (and posh) neighborhoods down there.

Dubliners might be the most aggressive pedestrians I’ve encountered. I’m a pretty fast walker, but I was frequently overtaken, even by little old ladies. I could never figure out where folks were rushing to.

In all, we enjoyed our time in Dublin. We tired ourselves out walking, we learned about essential Irish history, and had some good meals. If I had to do it again, I would have tried harder to find people to connect with — some of our best time involved dining with locals, getting better context about Dublin and Ireland’s contemporary situation, and just enjoying the company of others. Dublin seems to be a good 3-day town… I think had we stayed another day we would have gotten antsy, so I’m happy that we’ve moved on.

I’m writing this on a train heading west from Dublin to Galway. We’re spending the next 5 days driving around the west, hiking, visiting historical sites, eating seafood, and drinking more Guinness. So far, the train ride through the countryside has been lovely, and I look forward to more of the same.