I’m a little late to the party on this one, but last week, Paul Kedrosky pointed to this chart presented by Microsoft touting their R&D spend, seemingly as a way to say “we’re more serious about this stuff than Google.” 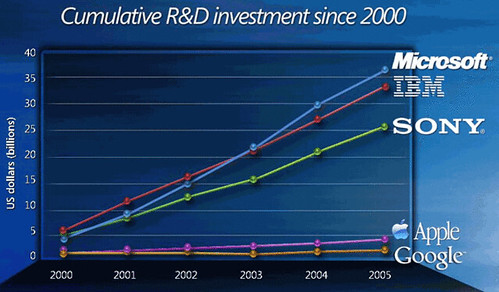 As Paul, and his commenters, point out, spending R&D money isn’t the same as producing results. I wrote about this in February 2004, where I called into question the value of R&D in interaction design. Over two years later, and it still stands — innovation is occurring in places with almost no official R&D spend (particularly in this Ajax epoch).