A highlight of our Carolinas trip was visiting Old Salem a couple days ago. The website really doesn’t do it justice. Old Salem is a remarkable history learning experience (and I use “experience” advisedly).

We began at the new visitor center, a modern building decked with “Old Salem” in massive type. I immediately wondered, “Who funded all this?” Because the new center, as well as the town, is in excellent condition, and not cheap.

Salem was the central town of a Wachovia, a tract of land owned by the Moravians. It’s hard to determine just how active the contemporary Moravian church is, and to what extent they pay for Old Salem… in the same way that Mormons clearly shell out a lot of dough to provide for the upkeep of Nauvoo.

Though I was a bit hesitant to pay the $21 entry fee, it was totally worth it. We spent about 5 hours walking around the historic town, visiting with costumed interpreters who helped us understand what life was like back then. 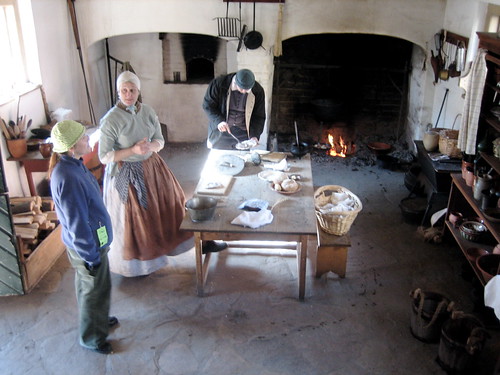 A few of the buildings provided a distinctly Moravian flavor — the African-American church (and its graveyard), the Single Brothers House (where men lived after the age of 14, until they were married), the Tavern… These were all influenced by the practice of the Church. Much of the town, though — the trades, the doctor/apothecary — were simply generic old timey.

One thing that didn’t come across as strongly as it should have is the degree to which the church *controlled* the town. Like Amana, Salem was managed by a set of church elders who pretty much determined everything. Competition was not allowed (so you didn’t have more than one shoemaker, or more than one silversmith). Decisions were made by the elders, and the decisions they couldn’t make were decided by lot, which supposedly provided God’s decision on the matter. The overbearing-ness of the church is alluded to, but not really directly addressed.

To Stacy’s delight, Salem is also the home of the original “small town big thing” — the Coffee Pot. 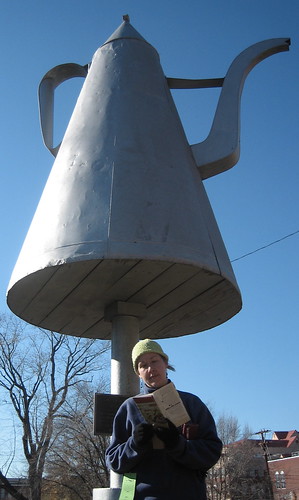 Don’t bother with sandwiches at the shop above the bakery. If we were to go back, we’d make time to eat at the tavern. And the gift shops were essentially filled with crap. But I guess that’s nothing new.

Sadly, I wasn’t the best photographic chronicler, so I didn’t end up with many pictures. There’s a good collection from various folks on Flickr.