It’s been a while since I’ve written about our travels in Chile.

We’re currently in Viña del Mar, a seaside town just north of the more famous Valparaiso. We’re staying at the Hotel Monterilla as guests of its owner Jorge Barahona (who also happens to run AyerViernes, a leading user-centered design agency in Chile).

Since I last wrote about our Chilean travels, we were in Santa Cruz (for the IA Retreat). We stayed at the Hotel Santa Cruz, an extremely nice hotel, and enjoyed great meals and socializing. As part of the retreat we visited Vina Santa Cruz, a vineyard owned by the hotel, that was something of a wine-making Disneyland — it was clearly designed for tourists (with a restaurant, a gift shop, a funicular to take you up a hill to a plateau with an observatory, a Mapuche house, a Rapa Nui (Easter Island) house and moai, and two llamas for petting. Or kissing, as the picture below shows. 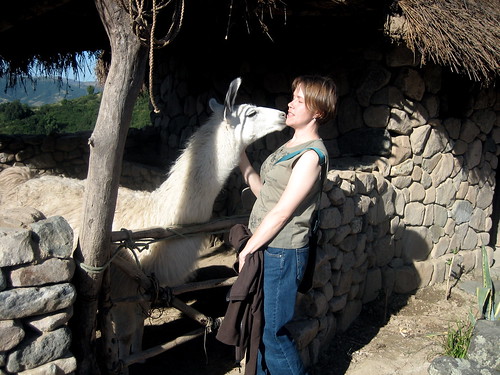 After Santa Cruz, we returned to Santiago, where we stayed in the “boutique” Hotel Bonaparte. I put boutique in quotes because, while that’s how the hotel refers to itself, in style and substance it’s about a step up from a Howard Johnson’s. It wasn’t a bad place, but nothing special at all.

The next two days in Santiago were dominated by the conference, and conferences are pretty much the same all over. This one did have the distinction of having a sitting senator give a talk (which I already wrote about).

The evenings became the points of distinction. The first night we ate at El Chalan, a Peruvian cuisine restaurant that was *very* tasty, and a delightful hint of what is to come for Stacy and I when we’re in Peru. The second evening was spent at one of the Liguria bar/restaurants, a loud, boisterous place with good food and free-flowing booze. 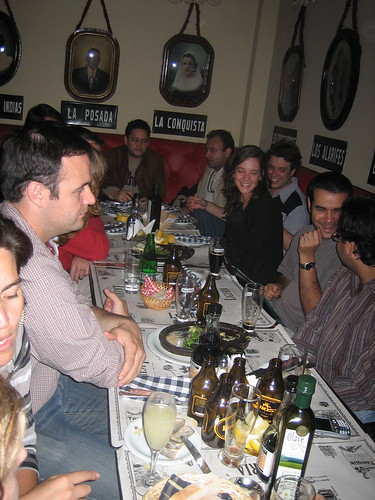 Yesterday, before heading out to Vina del Mar, Javier drove us around the shiny and new parts of Santiago that we had yet to see. New Santiago very much looks like New World City anywhere, resplendent with Starbucks and wide streets.

He then took us to his favorite lunch spot, which he called the “non-restaurant,” because it’s not an official licensed restaurant. I don’t think it had a name. It looks kind of like a restaurant tucked into a house. We had cazuelo, a traditional Chilean hearty soup, followed by a dish of gelatin. It was a delightful not-typical-tourist experience. 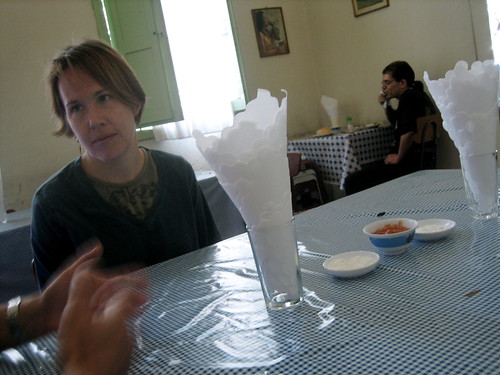 From there, we headed to the Metro, and connected to the interurban bus system, and ended up in Viña del Mar. Last night we wandered around Vina, a pleasant seaside town. We still haven’t gotten used to the 9pm dinner times, so we were hungry and aggro by the time we ate. We need to remember to snack around 5:30pm (Chileans even have a name for it — once, which means eleven, but which is traditionally eaten at 5pm). Today, we head over to Valpo for some walking on the hills!