Stacy and I arrived yesterday at 6:30am in Santiago airport, after something like 16 hours on planes or in airports (Oakland –>(change planes) Los Angeles –> Lima (stay on plane) –> Santiago). We slept for shit — during the longest leg, from Los Angeles to Lima, we were in the same row as a voluble 2 and a half year old child.

So, when we landed, we were out of it. It was helped that our first sight in Chile was the immigration line: 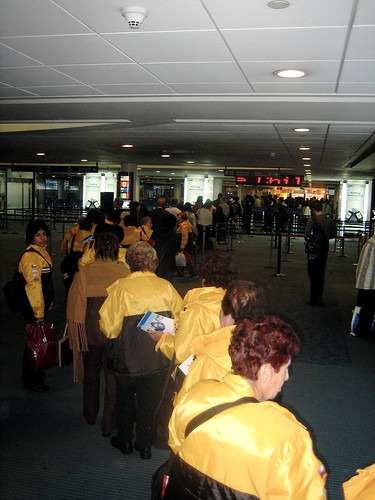 We had been in the very back of the plane, and we had to pay for “reciprocity”, because, it seems, the US are dicks to visiting Chileans. Thus, we ended up at the very end of the immigration line, as you can see there.

We were picked up by Gabriela and Katya, and they drove us to the center of town to find breakfast. We met up with Jorge (it seems that most Chilean men are named Jorge or Javier), and wandered around. As it was only 8am, pretty much every place was closed — Chileans don’t go out for breakfast. We ended up at Emporio La Rosa (Spanish-language description, English-language description (scroll down)), a heladeria that also served pastries and coffee. 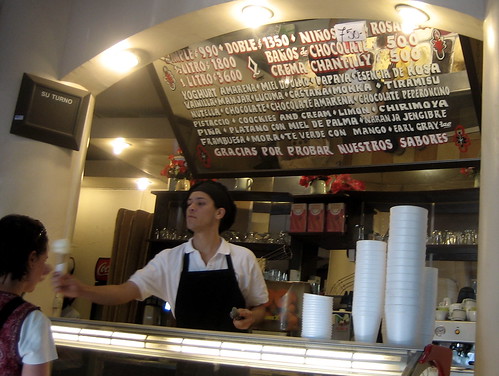 Our breakfast hosts took us to meet up with Javier at his office at Yahoo! Research. We dropped our bags off, met up with Jorge Arango and Peter Morville, and headed out for a walk around downtown Santiago. We were too tired to bother with museums — there was no way any information would sink in. So we stuck to the streets, eating mote con huesillo (sweet syrupy drink with peaches and barley), watching folk music in the plaza, and just taking in the hurly burly.

We ate at what our guide book called a “tourist trap”, Donde Augusto, in the Mercado Central. Mostly we wanted a comfortable place to sit and eat, and we were hungry for fish, so while things cost more than they would elsewhere, it was an easy meal. I ordered congrio frito, a fried, lightly-breaded white fish, served a lo pobre, which means topped with fried eggs, and with fries. 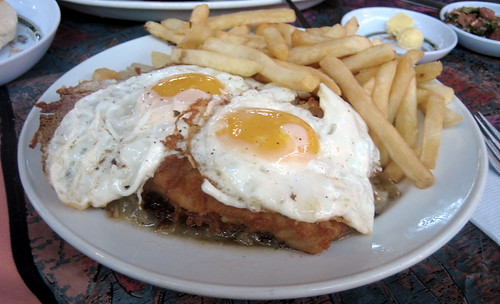 We needed to work off our meal, so we headed out and up Cerro Santa Lucia, a hill in the middle of the city upon which has been developed as a park with some fanciful architecture. This was probably the most touristy thing we did.

After this hike, we headed back to Emporio la Rosa, as Jorge had a strong jones for ice cream. I had a delightfully refreshing cone with frambuesa (raspberry) and vainilla. Oh, and some espresso, because Santiago is not known for its good coffee, and I’d learned in the morning that the brew here was solid.

This fortified us for our walk back to Yahoo! Research, by way of the Alameda (the main boulevard of Chile, for both autos and pedestrians), and a Paseo whose name I cannot find. Buses awaited to take us to Santa Cruz, about a 2 and a half hour drive south of Santiago, through the gorgeous Central Valley. Our destination was Hotel Santa Cruz, a remarkably well-designed kind of colonial Spanish space which is serving as the venue for the IA Retreat.

After a much-needed shower (remember: 16 hours of air travel, walking around downtown Santiago in ~80-degree heat), we enjoyed a pisco sour in the bar, and then a meat-filled dinner (grilled beef served in slabs, sausages, chicken, etc.) accompanied by bottomless vino. A couple hours of this, and I was exhausted. And slept for a solid 8 hours for the first time in many days.