The conference that I spent around 8 months planning, IDEA, transpired over the course of last Monday and Tuesday. In short, it went really well. Attendees seemed genuinely enthused — many went out of their way thank me. The speakers had a good time with one another and the audience. And, after I was able to come down off the epinephrine buzz of constantly being “on”, I realized that it all pretty much went off without a hitch.

And now, some remembrances, lessons learned, and other thoughts about the event.

On Being the Host

I’d never run a conference before. Having taught two-day workshops, I figured this would be easier, in that I would be doing very little speaking. Um, boy was I wrong. Someone running an event falls prey to continuous partial attention. You are constantly “scanning the periphery,” and, after 8-9 hours of this two days in a row, I was pretty spent. I also didn’t drink in the talks as much as I’d like, particularly David Guiney’s National Park Service discussions. By the second day I was better able to focus on the presentations, but still, let’s just say we didn’t record the event just for those who weren’t there…

The other thing about being the host is that you don’t have the element of surprise around the presentations that others do. You’ve been working with the speakers for months, and, even if you don’t know exactly what they’re going to say, you’ve got some pretty good notions. Typically, if I attend an event like this, I pull together emergent themes, often unintended by the conference organizers. I have no idea if such themes existed for IDEA — I had trouble seeing beyond the overarching “designing complex information spaces” theme to identify anything else that emerged.

And even though I shouldn’t play favorites with the sessions, some talks have really stuck with me:

(by the way, all presentation audio, and many of the slides, can be downloaded here.)

Dave Cronin – Art for the Public. I am a sucker for presentations where standard user-centered design methods (stakeholder interviews, user research, interaction design, prototyping) are used in novel environments, such as the design of a web, kiosk, and mobile system for supporting art appreciation at the Getty Center in L.A. It continues to provide evidence that such design isn’t special or otherworldly. 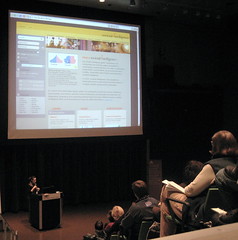 Fernanda Viegas – Democratizing Visualization. This might have been, for me, the single most exciting project discussed at IDEA (with the possible exception of StoryCorps). Fernanda gave a sneak peak at Many Eyes, a service soon to be released by IBM Research that allows people to visualize data — either their own, or publicly accessible data. It also turns these visualizations into social artifacts — people can comment on one another’s visualizations. There is so much potential for this — my glib take on it is “It’s Youtube for Data Viz!” 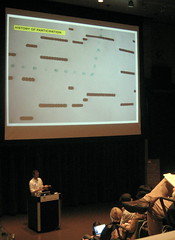 Dan Hill – The New Media. As Dan’s talk unfolded, I feared that he was going to wander off into esoterica, satisfied to show pretty pictures of buildings and musical notation. But he pulled it all together in the end, demonstrating how the experience of media, increasingly fractured across many different channels and at many different times, can use this discontinuity to create an effect where the whole is greater than the sum of the parts.

I chose the Central Library because it is a space that embodies the theme of the event — it manages complex information across a physical and virtual realm, and really allows information to be a substrate of the architectural space. It’s also just a fun, weird, and interesting building to be in.

I also chose the Central Library because it was crazy cheap — the Microsoft Auditorium costs $1,000 a day, for a room that holds over 200 people, has up-to-date presentation facilities, and comfortable seating where everyone has a good view. It even includes a full-time A/V technician.

If you’re planning an event in Seattle, you’d be foolish not to consider the Central Library as a venue. It’s well-located, surrounded by hotels, a brief walk to Pike Place Market, excellent wi-fi coverage, and your attendees will just dig it.

Sarah Rice, who was essential to the success of the event, insisted that we serve breakfast and afternoon snacks, and she was right to do so. Attendees devoured the food we gave them, and never again will I consider NOT feeding and watering people coming to an event.

The first day, we experimented with having groups sign up to lunch together at nearby restaurants. It worked okay, though even when we extended lunch to 90 minutes (from 75), timing was still very tight to get people out of the library, to a restaurant, seated, ordered, served, fed, paid, and returned. Also, all the nearby restaurants were kinda pricey.

The second day we just sent people out on their own, and I headed over to the Public Market for a killer grilled cheese sandwich. If the weather is right, going to the market, and then to the park at the end of the market is probably the best way to have a quality Seattle experience.

So Will We Do It Again?

I suspect so. I haven’t talked about it with the IA Institute board yet. I know I cannot put in the time and energy I did this go around, but I don’t think I would have to. We’ve figured a bunch of stuff out.